I started-out designing solutions for things quite early. when my grandmother died, I was about 12 and inherited her room. I designed and built the entire room making it definitely "mine." the ceiling and walls were done in a basket-weave wallpaper with a light charteuse and grey, The old doors were painted the grey of the paper and the ipanels were inset with leopard-skin fabric. The drapes (which I sewed) were bright red. I made a "Hollywood" bed with no headboards or foot boards and hid this behind a stack of books shelves in aq Tansu pattern. I made a lamp of a nude female figure, moved in my piano and made a rug sewn from rug remnants. It was very cool. It was also my first real "art" acquisition: I had two paintings done of African idols in greys. Later I built the basement recreation room, customized my 1941 Ford convertible('49 Ford Grill, no visible handles (door, trunk, hood), '49 Plymouth ribbed bumpers, and of course, it was lowered at the rear (as we did in those days). Pipes of course and I kept it in grey primer most of the time. I did the interior in green snakeskin upholstery and finally painted it a Chrysler product metalic green. Cool car. After H.S., it was off to college where I papered my half of the room in sheet music and my room-mates (an engineers) in blueprints. When I moved into another place, I made a cool room using burlap covered frames for the windows and papered one wall of the room with New Yorker covers. While in medical school, I designed and built a traveling exhibit for an ophthalmologist who had invented an operation for detached retinas: the scleral buckle. The exhibit won first prize for design! I also helped do the interior of the Tiger Lounge where I played piano for about five years while in school. I got married while still in school and had no money at all, so I designed and built all of our funiture using my bicycle as a truck for the wood, which I had precut for me at a cabinet shop. While in the Navy, I was stationed in Oakland, CA and designed and had built a house for us during our residency at Stanford. I made all of the cabinets for the house while living in Oakland--I had a car then, and old Cadillac convertible which I used as my truck. The house, which was located in Los Altos, was featured for several iddues of Sunset Magazine. While in the Navym, I took an architectural drafting course by correspondence which got me up to speed in drawing mechanical and architectural elements and plans.

When I completed my residency at Stanford, I moved to Santa Rosa, CA where I bought a tiny frame cottage in the woods and completely remodeled it, doing all of the tile work, plumbing, cabinetry, wall papering (I used a metalic silver wall-paper with no design on it to expand the sense of space--the house was a total of 650 square feet. It was a great little house. But I got bit by the incredible design talent of architect J. Carson Bowler, who did many of the Sea Ranch houses. With my son Matthew as the leader of the design team, Carson designed an incredible house for us. I was able to do all of the interior cabinets, tile work, kitchen counters (marble), dining table, light fixtures, and so forth. We used a simple palate: black slate for the floors at ground level, teakwood floors elsewhere, The Cabinets were all teak. I also made all of the interior and exterior doors, laminating them in "La Honda" 3/8" 1" x 4" redwood. I used Koss hidden hinges throughout. The list below will access a variety of design projects I'd like to share with the reader. 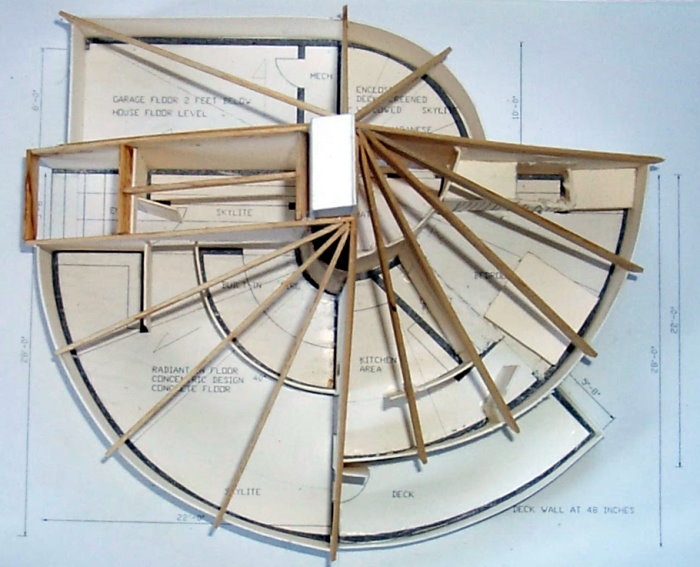